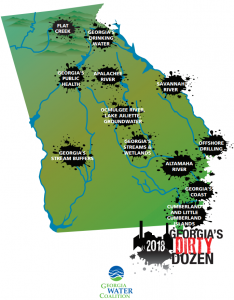 The Georgia Water Coalition has released the “Dirty Dozen” report for 2018, detailing 12 of the worst offenses to Georgia’s waters. This annual report typically identifies the “most polluted places” in the state, but this year’s eye-opening report instead focuses on the politics, policies, and issues that threaten Georgia’s water quality and its residents’ well-being.

“One week in March illustrated the extent of the dirt in Georgia’s politics when it comes to protecting our water.

These examples are just the tip of the iceberg. Read the 2018 Dirty Dozen to learn more!”

View and share the 2018 Dirty Dozen Report and Press Release:

Links to individual sections of the report are available here.