In the spring of 2019, the Forest Service issued a Scoping Notice for the White Pine Management Project on the Andrew Pickens Ranger District in South Carolina. The current proposed project area encompasses approximately 1,952 acres of national forest land, including a significant portion of the Chattooga River watershed in Oconee County. Even-age timber harvests, or clear-cuts with reserves, are proposed for 1,195 acres, commercial thinning is proposed for 59 acres, and uneven-age group selection harvests are proposed for 698 acres. Tree-cutting would be followed by herbicide application, prescribed burning, chipping, and/or planting.

The White Pine Management Project would impact popular recreation areas used by the public for horseback riding, mountain biking, hiking and scenic enjoyment.  It would also affect streams, rare stands of old growth timber, and adjacent private landowners. We hosted a public meeting about the project in late April 2019, and have since participated in meetings and hikes with the Forest Service and others involved in the project. We submitted comments on the White Pine Management Project Scoping Notice (May 2019), and on the Draft EA & Proposed 40-Acre Exemption (November 2020), and submitted an objection on the final EA and Draft Decision Notice/Finding of No Significant Impact (April 2021) :

The proposed project area can be viewed on our Interactive Map. 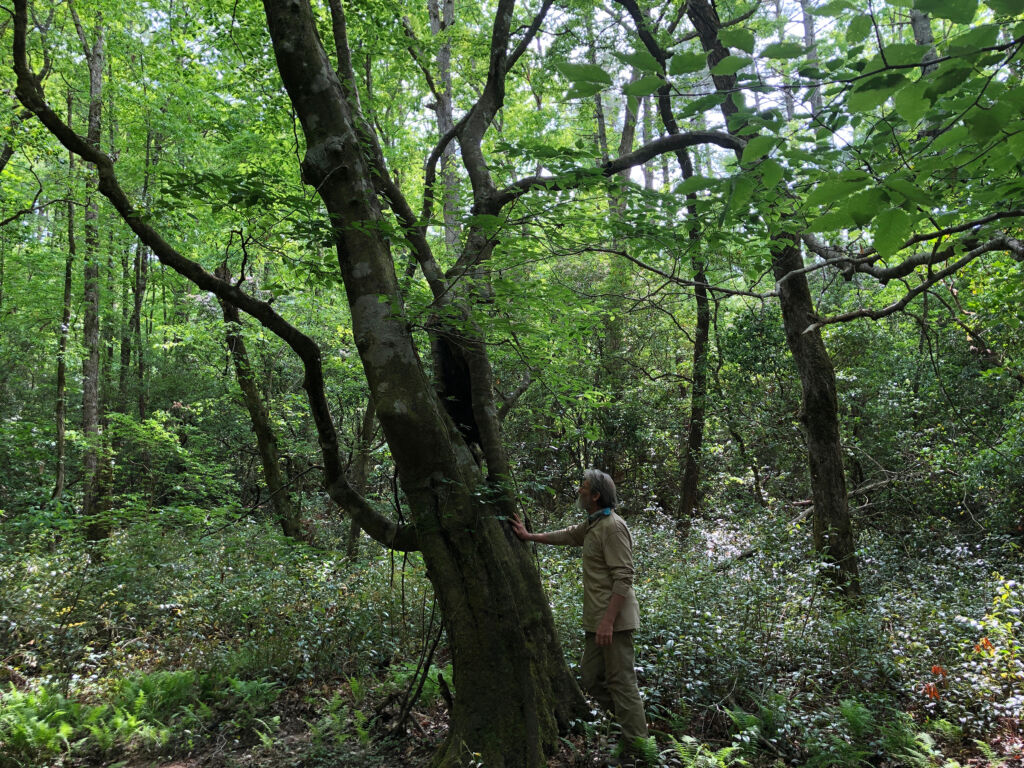 In response to objections to the White Pine Project, the Forest Service held a virtual “objection resolution” meeting on May 27th. Chattooga Conservancy staff joined three individual objectors in attending the meeting. An additional three parties submitted objections prior to the April 16th deadline, but these were “set aside from review” because the objectors had not previously submitted comments on the project.

The meeting provided an opportunity for objectors to explain specific project issues to Forest Service staff, including Forest Supervisor John Lint and District Ranger Robbie Sitzlar. The objectors expressed their concerns regarding old growth, habitat connectivity, climate change, forest diversity, erosion and sedimentation, aquatic resources, cumulative effects with the ongoing Loblolly Project, and impacts to the Chattooga River, scenery, recreation areas, and adjacent private property. Forest Service personnel acknowledged objections, but did not discuss these issues or provide any responses during the meeting.

On Tuesday, June 29th, we received Supervisor Lint’s written response to objections (issued June 24th by mail). The majority of concerns were not addressed with any changes to the project plan. The Supervisor requested that the AP District take the following actions:

Today, July 1st, the AP District released their Decision Notice and Finding of No Significant Impact, approving implementation of the White Pine Project. You can find full project details here, and view the project area on our interactive map.

Thank you to all who attended meetings, participated in the public comment and objection processes, and helped spread the word about this project! Public involvement contributed to the changes that have been made to the project plan since the Scoping Notice in 2019. Although we are disappointed with the outcome, we’ll continue to stay involved with water quality and resource monitoring as this project moves forward.

On February 26th, the Andrew Pickens Ranger District issued a final EA, along with a Draft Decision Notice and Finding of No Significant Impact for the White Pine Project, approving implementation of the project as described in the EA.  The Forest Service has also put together a separate document specifically containing responses to comments received in the previous comment period. The publication of this notice in the Seneca Journal on March 2 kicked off a 45-day objection period that will end on April 16th.

Little has changed since the release of the draft EA in the fall: timber harvest acreage has been reduced by 20 acres to a total of 1,952 acres; maps and project documents have been updated to more clearly indicate stand access routes; and the Forest Service has added a design criterion to add a buffer around a patch of pink lady slipper in C34/S17, if possible. Considering these and other relatively minor changes, our previous comments remain largely relevant. We’ve updated our talking points to summarize our main concerns– feel free to use these to help guide your own comments.

Note that the objection process at this stage is different from the standard commenting process throughout project planning. Objections must contain the minimum content requirements specified in §218.8(d), and must be filed with the reviewing officer, Rick Lint, Forest Supervisor. Comments can be submitted either by email to SM.FS.r8fmssoobj@usda.gov OR mail to:
Rick Lint
4931 Broad River Road
Columbia, SC 29212

The Draft Environmental Assessment (EA) has been released, kicking off a 30-day comment period that will end on November 13, 2020. The Forest Service also issued a Proposed Exemption to the 40-Acre Standard in September, with a 60-day comment period that will end the same day (more here). Visit the Forest Service’s White Pine Project page for comment responses and other associated documents. We’ve drafted a few talking points to help guide comments. 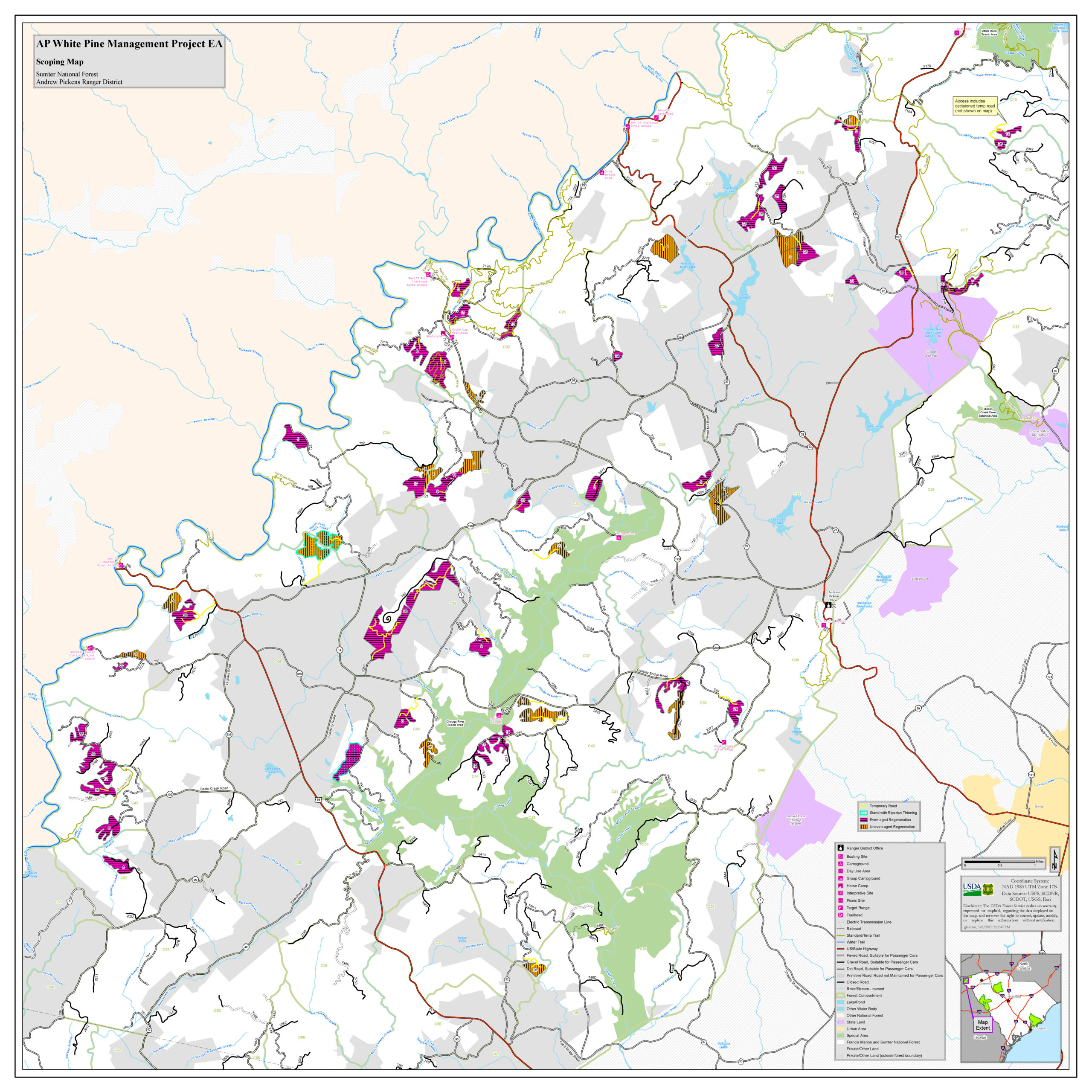