A Weekend in the Headwaters

Home All A Weekend in the Headwaters
  
By Chattooga Conservancy All February 18, 2019

I went for a hike up Brushy Mountain last weekend. Brushy Mountain is one of the tracts of land to be logged in the Southside Project. This project has gained more public outcry and attention than many of the Forest Service’s proposals in recent history. At a rally to protest the project back in November, the Forest Supervisor said that the crowd, of close to 80, was the biggest demonstration he had seen in years. This isn’t surprising, because of the destructive goals of the Southside Project.

The Southside Project is an initiative proposed by the Forest Service to log 6 tracts of land around Bull Pen Road in the Wild and Scenic Chattooga River’s headwaters. The proposal also includes logging 5 tracts of land directly around the Upper Whitewater River. To make matters worse, some of this land contains trees classified by the Forest Service’s standards as old growth. By their standards, the proposed action isn’t something they should justify. Regardless of the many issues surrounding this project, it is foolhardy to log old growth for timber sales when only ½ of 1% of old growth remains in the Southeast. Instead, we should be doing everything possible to preserve the crumbs of our natural heritage.

Two weeks ago, the Chattooga Conservancy received a letter from the Nantahala-Pisgah Forest Supervisor in response to the comments made at the public meeting and rally in November. The letter was a poorly argued and obfuscating justification for moving the project forward. They once again denied the trees (some 200+ years old) as being old growth so they wouldn’t have to play by their own rules.

In response to my own anger, confusion, and love for the area that I consider home, I decided that I was going to hike up to Brushy Mountain (home to some of the oldest stands proposed to be cut) and spend some time with the trees. Many of my friends also consider this wonderful river home, so I let them know my plans. Before I knew it, I had a group of 10 other people who were coming with me, and the plan turned into a camping trip to spend a night among these treasured trees. 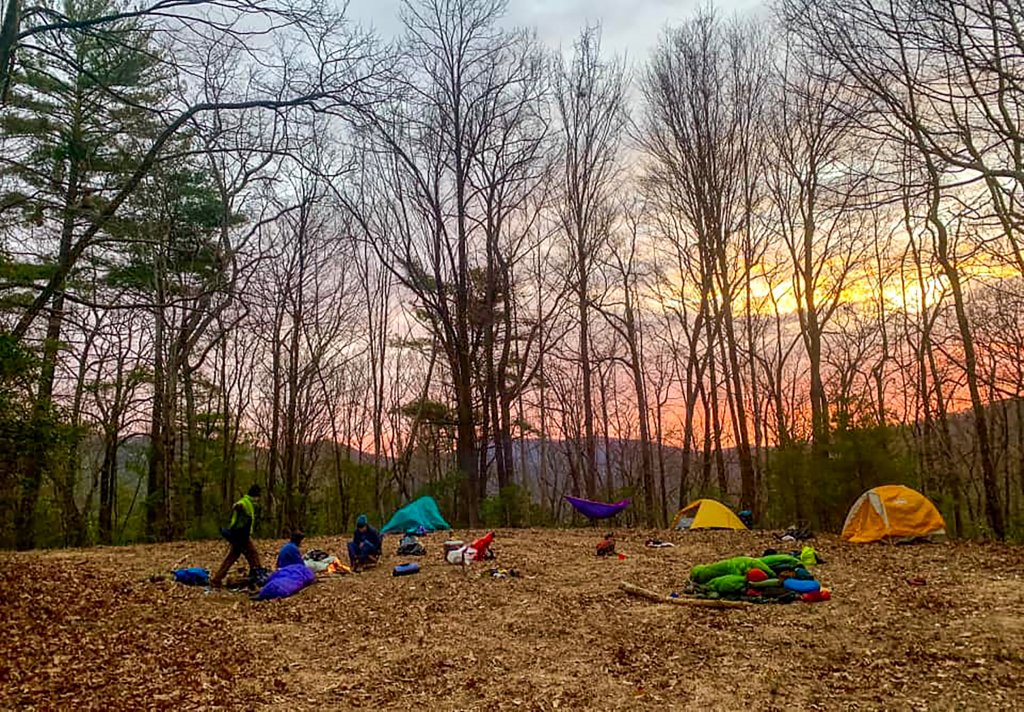 We all met at McCall Road off of Bull Pen around 6:30 on Saturday night.  While I was waiting for everyone to show up, I talked to a property owner who lived off of McCall Road, who ironically told me he felt the duty to do everything he could to protect these beautiful and remote areas. I told him about our hiking plans and asked if he had heard about the proposed logging off of his road. He had not.

Our group parked outside of the Forest Service gate off McCall Road. From there, we saw the effects, already evident, of the Forest Service’s logging on both sides of the road. We walked about ¾ of a mile up the logging road until we reached a big clearing at the base of the Brushy Mountain summit. We decided to camp there, because when we looked over our shoulders to the west, we could see the sun setting. We also had a clear view east to see the sunrise. As it got darker, we could see the lights of Walhalla and Seneca gently pop up in the east. When we looked west, there was nothing but the night black hills of western North Carolina.

Setting up camp later in the evening than anticipated, we planned to visit the trees in the morning. However, the night had different plans for us. As the stars peeked out into the sky and the Milky Way began to show its trail, we decided that it was the right time. Just before midnight, we set off up the ridge. Despite being all of our first times up on the mountain, we had a pretty good idea of where to go. I was told that the oldest trees were on top of the mountain, and off of an old skid trail from the days of harvesting trees pulled by mules and ox. We didn’t have too far to go, and quickly found what looked to be the old skid trail, but the darkness made it an exciting adventure.

We made our way up the mountain. In some places, we pushed through fallen trees and thick brush. As we neared the top and the trail was its steepest, I turned to my right to see a large White Oak. We were almost there. We kept climbing and our headlamps continued landing on the huge trees. In the dark, moving from tree to tree became a sort of exciting puzzle. Someone would say, “Woah! Look at this one!” and next thing I knew someone would exclaim, “Holy moly! This one’s even bigger!” The ecstatic jumping and springing through the night continued for a few minutes until we landed on one tree that held us all still. It must have been the oldest one up there. It was bigger than two sets of arms wrapped around it. The old White Oak’s bark alone was incredible. It looked like dinosaur scales, reminding us how old it was. We sat quietly near this tree for a while, enjoying the stars. I was able to let go of my anger towards the seemingly imminent destruction, and I felt the love of old life present in the White Oaks. After an hour or so, when the shiver set in, we decided to make our way back down to camp. 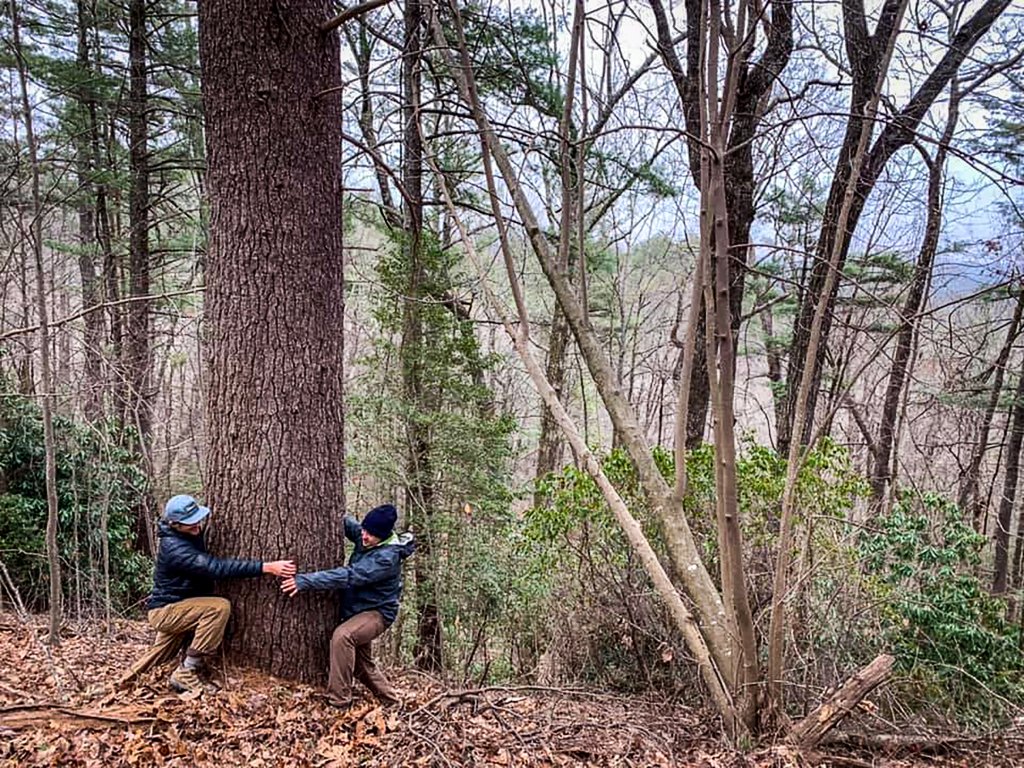 The next morning, we woke up to a burning sunrise and slowly packed up our things to head to Ammons Branch and Granite City. At Ammons Branch, we hiked up the ridge from the Ammons Branch campsite to find some big old White Pines (some of the biggest I have ever seen) that we enjoyed walking through. After making our way back down the ridge, we headed to Granite City. Instead of going to the proposed site of the cut, which we had visited before, we made our way up to the caves. There, we climbed through the granite tunnels and sat walled in by moss. I thought about the magic of the Chattooga’s watershed, its miraculous biodiversity and the fact that we have been lucky enough to experience it. It makes me wish more than anything to keep it safe from harm. Safe from harm of the very agency that is supposed to protect it on our behalf.

It leaves me asking, “What’s next? How can I stop this?” and sometimes the answer is unclear. For the Southside Project, our best bet is public uproar. Unfortunately, the Forest Service makes it difficult to voice your opinion because of their formal commenting process, and the fact that meetings about the project are held at the Forest Service office in Asheville. That in itself seems silly, because the affected area is in Jackson County, over an hour and a half away. However, we can start by making a big stink about this on social media. The Forest Service will be issuing their final decision soon, and it is looking like it won’t be in our favor. We are at the point where that decision will dictate the next steps we need to take. There will definitely be opportunities to get involved in the protection of the Chattooga River. However, right now the most important thing we can do is stay up to date on what is going on. The Chattooga Conservancy will be putting out more information as everything develops, and the best way to stay on top of things is by regularly checking the website and our Facebook. The most important thing you can do right now is speak out in disagreement to this project, and support the Chattooga Conservancy in whatever actions they take next. These issues are always easier to handle on the front end, but just because we’re at the back end now doesn’t mean we’ve lost. Through all of this, I think it’s odd that we have to fight the very organization whose motto is, “Caring for the land and serving the people.”

Seems like we’re having to do their jobs for them….